Philippine President Rodrigo Duterte has ordered troops to seize and occupy unpopulated islands that his country claims in the South China Sea. Duterte said that he may visit a Philippine-controlled island in the sea to raise the national flag.

“The unoccupied, which are ours, let’s live on it,” Duterte told reporters Thursday during a visit to a military camp in Palawan, near the disputed waters.

“It looks like everyone is making a grab for the islands there,” he continued. “So we better live on those that are still unoccupied. What’s ours now, we claim it and make a strong point from there.”

China, Malaysia, the Philippines, Taiwan, Brunei and Vietnam claim all or parts of the sea. This has led to disputes between China and some of its neighbors. Each year, an estimated five trillion dollars in trade passes through the waterway. 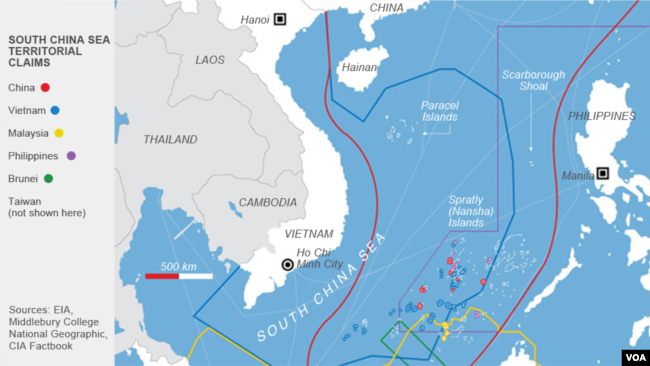 Duterte’s comments came just before the opening of talks between the presidents of China and the United States. The two leaders, Xi Jinping and Donald Trump, are meeting in Florida. China’s claims in the South China Sea were to be among the issues discussed.

The U.S. State Department did not comment on Duterte’s comments. However, in the past it has urged countries with competing claims in the area to reduce tensions and find a solution to their differences.

Duterte announced his “separation” from the United States in October 2016. He also said the Philippines and China had agreed to work together. The two nations agreed to resolve their South China Sea dispute through talks. 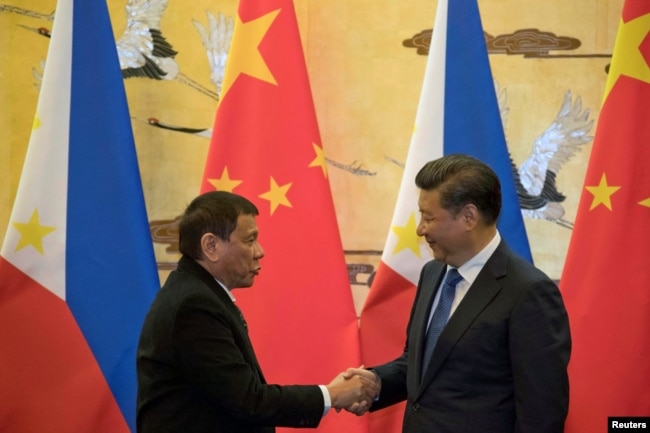 Duterte’s efforts to work with China marked a major change in foreign policy.

The Philippines occupies nine “features,” or islands and coral reefs, in the South China Sea. They include a World War 2 transport ship that struck a shoal in the late 1990s.

Bonnie Glaser is an Asia expert at Washington’s Center for Strategic and International Studies. She compared the Philippine leader’s latest comments to statements he made as a presidential candidate.

Duterte once joked that he would ride a jet ski to a Chinese man-made island in the South China Sea to strengthen his country’s claim to the territory.

Glaser told Reuters news agency that “Duterte seems to be under great domestic pressure and criticism” on issues connected to the South China Sea. She said his comments may have been driven by Philippine politics, not international politics.

Duterte also said he might visit Thitu, the largest of the Philippine-controlled islands in the Spratly archipelago. He said he would build housing for servicemen operating in the area.

Thitu is close to Subi Reef. Subi is one of seven man-made islands in the Spratlys that China is accused of developing for its forces.

Duterte said last month there was no good reason to dispute China’s activities on the man-made islands. He also made fun of the media for taking his jet-ski comments seriously.

“We cannot stop them because they are building it with their mind fixed that they own the place. China will go to war,” he said.